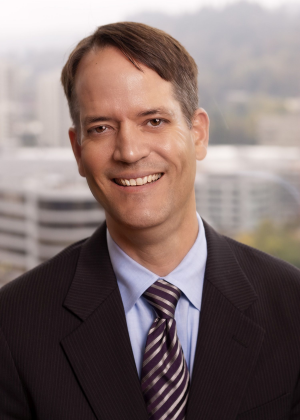 Deatherage received the award a week ago from the Skyloo District of the Cascade Pacific Council, Boy Scouts of America. Recipients are nominated by adult peers and only one award is presented for every 60 troops.

Deatherage grew up in Douglas County and joined the Boy Scouts as a Cub Scout in 1979. He graduated from Roseburg High School in 1987. He’s now an attorney for a Portland law firm.

In 2009, he and his wife spent a day with young scouts at Camp Baker near Florence. The experience motivated him to start volunteering and working with youth scouts.

“We decided that it would be a way to keep us engaged and make a difference in the lives of youth,” he said. He has spent one week for the last seven summers serving as a Provisional Scoutmaster at Camp Baker.

Since 2010, Deatherage has dedicated over 500 service hours to Mount Hood Kiwanis Camp, a nonprofit camp program for people with disabilities. He has been an active member of the Order of the Arrow Honor Society since the 1980s and remembers every line in the pre-ordeal and ordeal ceremonies for people entering the organization.

The OA Honor Society, also known as the National Honor Society of the Boy Scouts of America, was created to honor scouts who best represent Scout Oath and Law.

Article originally published in the March 3, 2017 edition of the Roseburg News-Review.